See the instructions on how to set up a cluster of WSO2 Micro Integrator nodes in an on-premise VM deployment. A third-party load balancer is used for this deployment.

This deployment scenario is a two-node Micro Integrator deployment. That is, two Micro Integrator nodes are configured to serve requests with high availability and scalability. The product nodes in the deployment are fronted by an external third-party load balancer, which routes requests to the two nodes on a round-robin basis. 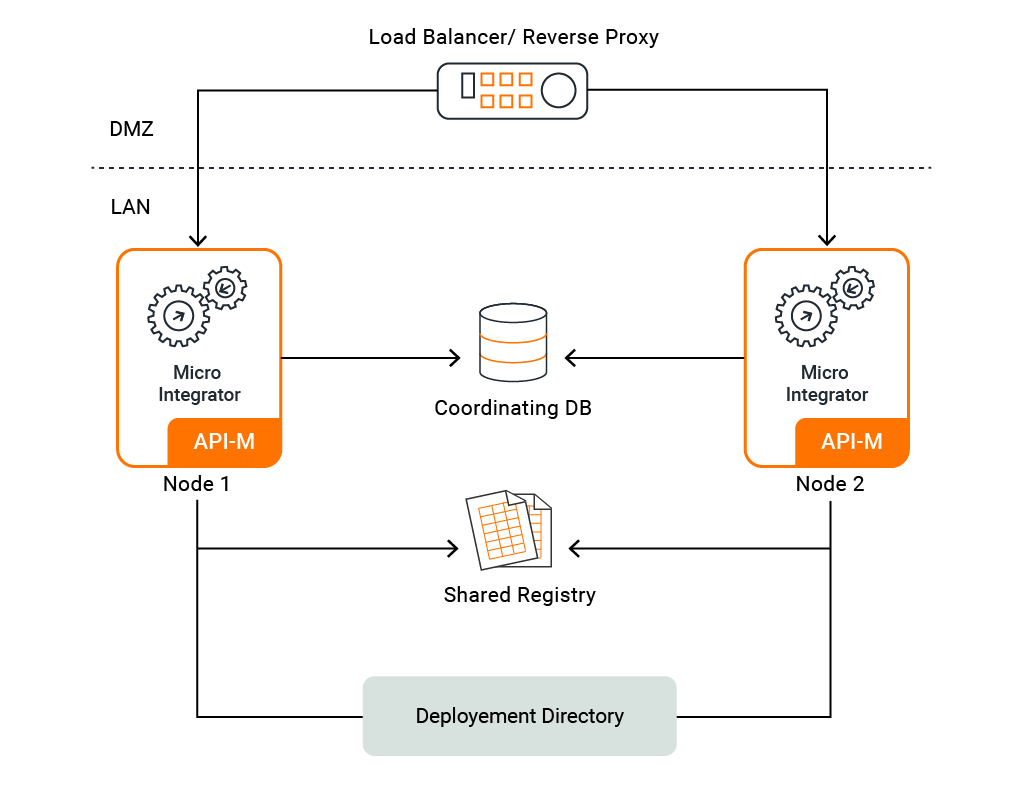 Let's set up two instances of the Micro Integrator server.

Open the deployment.toml file (stored in the <MI_HOME>/conf folder) of each server instance and update the hostname.

See the descriptions of the service catalog parameters.

RDBMS-based coordination needs the system time of each node to be synchronized. Having them not synchronized will lead to unexpected behavior. Please refer EI_1758 for one of the possible issues.

The node ID is a unique identifier, which is used to identify a node within the cluster. This is useful in situations where certain requests need to be routed to the server node based on the node ID. For example, scheduled tasks should only run in specific nodes.

By default, a random UUID value will be used as the node ID. However, you can assign a specific node ID using the following methods:

If the node ID is specified using multiple methods, the applicable node ID will be fetched in the given order.

When you have scheduled tasks in your integration deployment, each task should only run in one node of the cluster. The task resolver configuration in your server nodes specifies the logic for allocating tasks to the server nodes.

The resolving_period and resolving_frequency properties are set by default as shown below. It is not recommended to change these default values.

When you have a cluster of nodes, the integration artifacts deployed in each server node needs to be identical. This can be achieved by synchronizing the deployment directories of each server.

Registry sharing is only required if you have Message Processors in your deployment.

The shared registry maintains the state (active/inactive) of the Message Processor artifact. This ensures that the same state is maintained for Message Processor in all the Micro Integrator nodes of the cluster.

If you need the HTTP/HTTPS traffic to be distributed among the nodes, you need to front them via a load balancer of your choice and balance the loads among the node URLs.

Follow the instructions on setting up a load balancer for a two-node deployment of the Micro Integrator.

Ensure that you have taken into account the respective security hardening factors (e.g., changing and encrypting the default passwords, configuring JVM security, etc.) before deploying the Micro Integrator. For more information, see the production deployment guidelines.

Start one server in the cluster by executing the server startup script from the MI_HOME>/bin folder.

When you start one server, you can observe the following logs indicating that it joined the cluster.

When you start the second server, you can observe the following member addition log in the other server. This indicates to other servers in the cluster that a new node has joined.

You could observe the following member removal log in other servers when one node is removed from the cluster.

Create a simple scheduled task using WSO2 Integration Studio and deploy it in the two Micro Integrator servers. See the instructions on creating a scheduled task.

The above log can be observed in only one server and this implies that the task is scheduled only in one node when coordination is enabled.

Shutdown the node in which the task is scheduled and observe the following log in the other node.

The above log describes the failover capability of the tasks when the task server becomes unavailable.