Throttling allows you to limit the number of successful hits to an API during a given period, typically in cases such as the following:

You can define throttling at the API, application, resource and subscription levels. The final throttle limit granted to a given user on a given API is ultimately defined by the consolidated output of all throttling tiers together.

It is possible to throttle requests for each tier based on the request count per unit time or the amount of data (bandwidth) transferred through the Gateway per unit time. You can configure this via the Admin Portal as explained under Adding New Throttling Policies.

Let's take a look at the different levels of throttling:

Subscription-level throttling tiers can be applied for an API when creating APIs using the API Publisher portal. 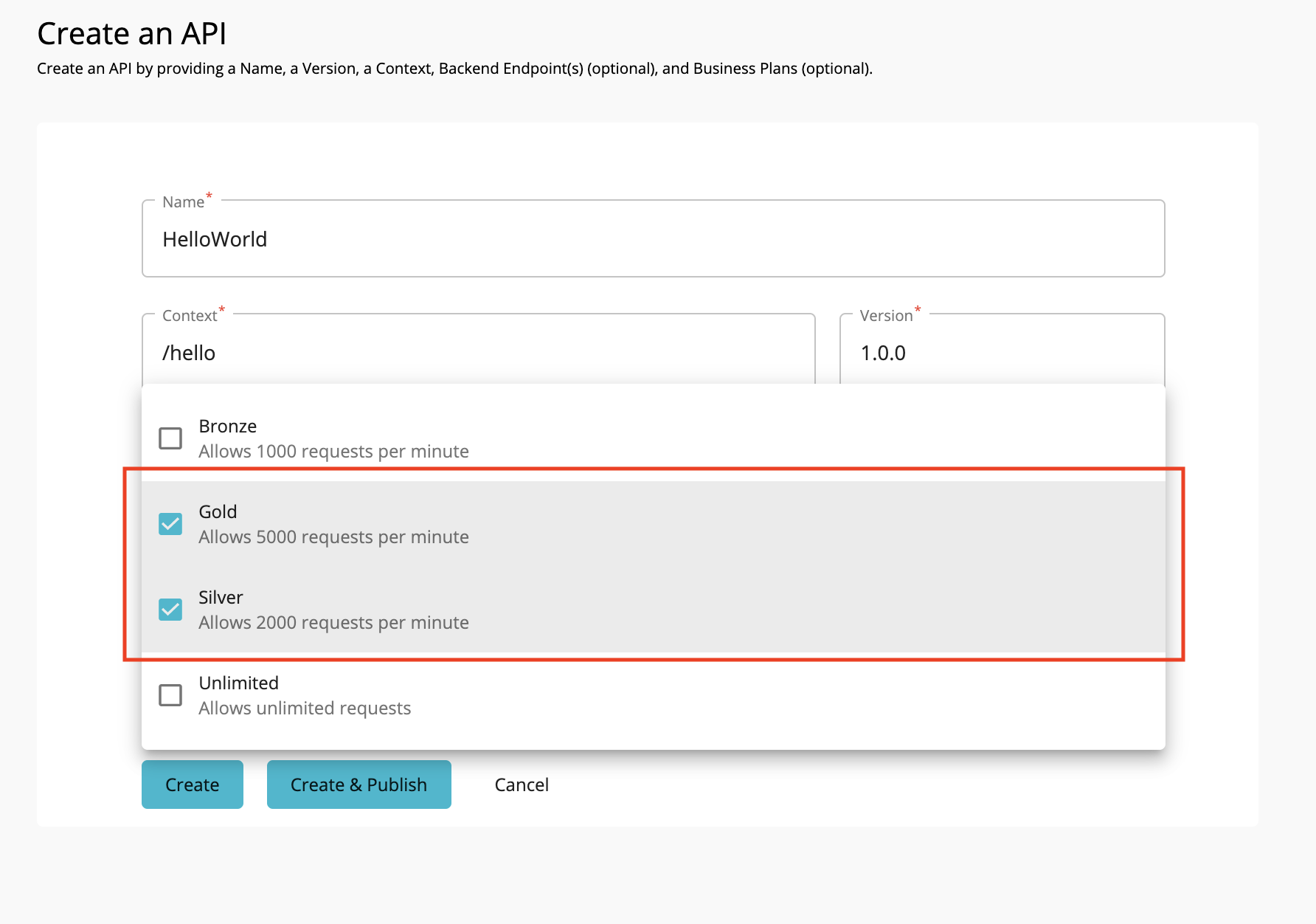 For instance, if there's a subscription level policy enforced over a long period, you may not want users to consume the entire quota within a short time span. Sudden spikes in usage or attacks from users can also be handled via rate limiting. You can define a spike arrest policy when the subscription level tier is created. For more information on using rate limiting in subscription tiers, refer Adding a new subscription-level throttling tier.

Spike Arrest Policy(burst control) is used to protect the API backend against large number of traffic spikes and DoS attacks. Unlike setting one definite throttling tier (Quota), it helps to limit the sudden increase of number of requests at any point in time.

As an example, if we specify a quota policy as 20 requests per minute, it is possible to send all 20 requests in first few seconds in one minute so that we cannot limit it. By defining a spike arrest policy as 10 requests per second, it equally scatters the number of requests over the given one minute. Therefore, by doing rate limiting we can protect the backend from sudden spikes and DoS attacks through spike arrest policy.

For each subscription level throttle key, a WS policy is created on demand. The request count is calculated and throttling occurs at the node level. If you are using a clustered deployment, the counters are replicated across the cluster.

After subscription-level throttling tiers are set and the API is published, at subscription time, the consumers of the API can sign in to the Developer Portal and select which tier (out of those enabled for subscribers) they are interested in, as shown below:

Advanced throttling policies are applied when you are Publishing an API. It can be further divided into the following two levels base on the applicability.

API level policies can be engaged via the resources section of an API in the Publisher portal by selecting API Level under Rate limitting level as shown below.

An API is made up of one or more resources. Each resource handles a particular type of request and is similar to a method (function) in a larger API. You can use this method when handling a large number of request at resource level such as Financial transactions. For example, Imagine API have two resources and one resource take more request than other you do not need to throttle it in API level in that case you can use this. Resource-level throttling tiers are set to HTTP verbs of an API's resources. You can apply resource-level throttling through the Resources section of an API as shown below. 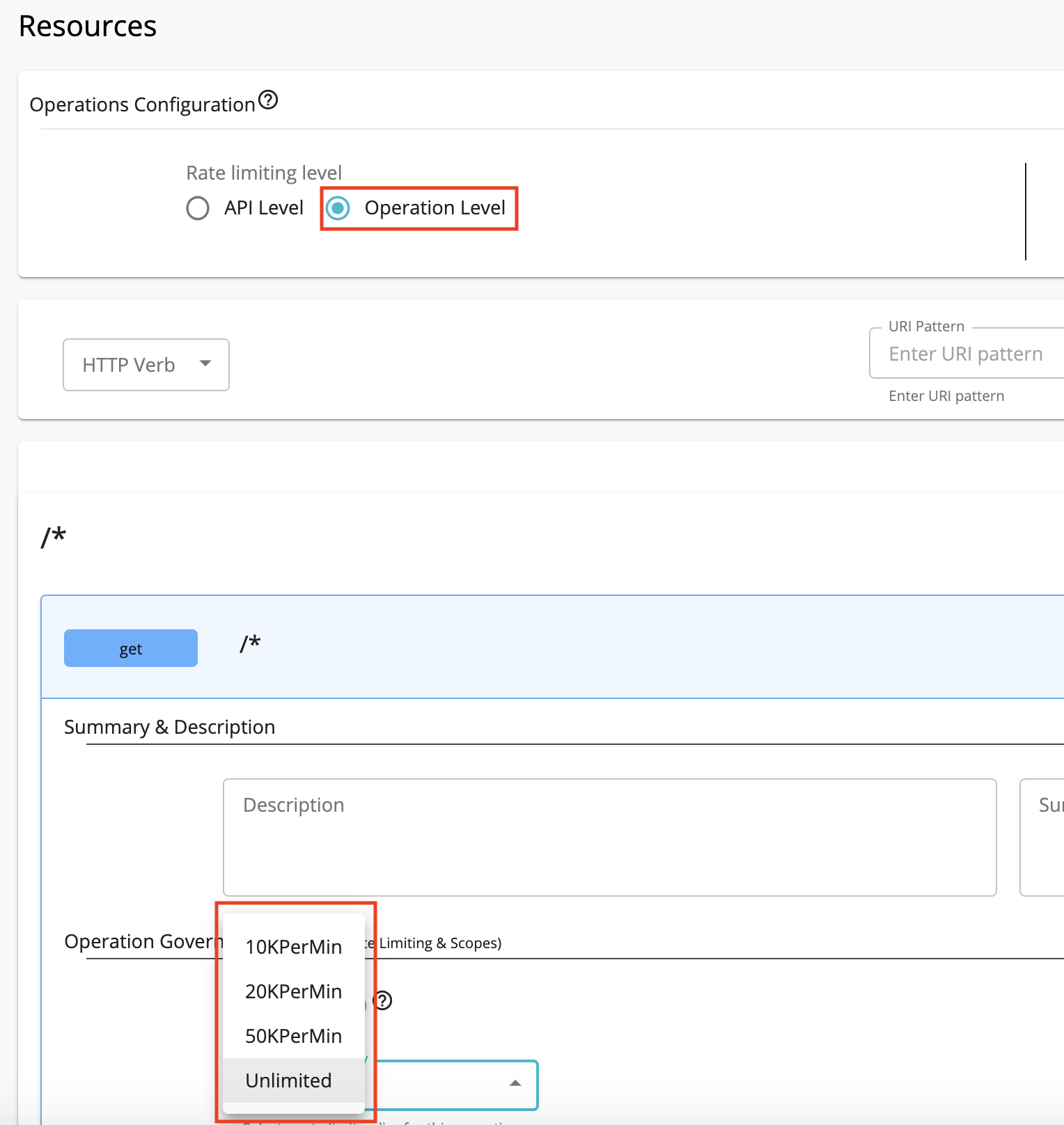 Application-level throttling tiers are defined at the time an application is created in the Developer Portal as shown below. The limits are restricted per token for a specific application. 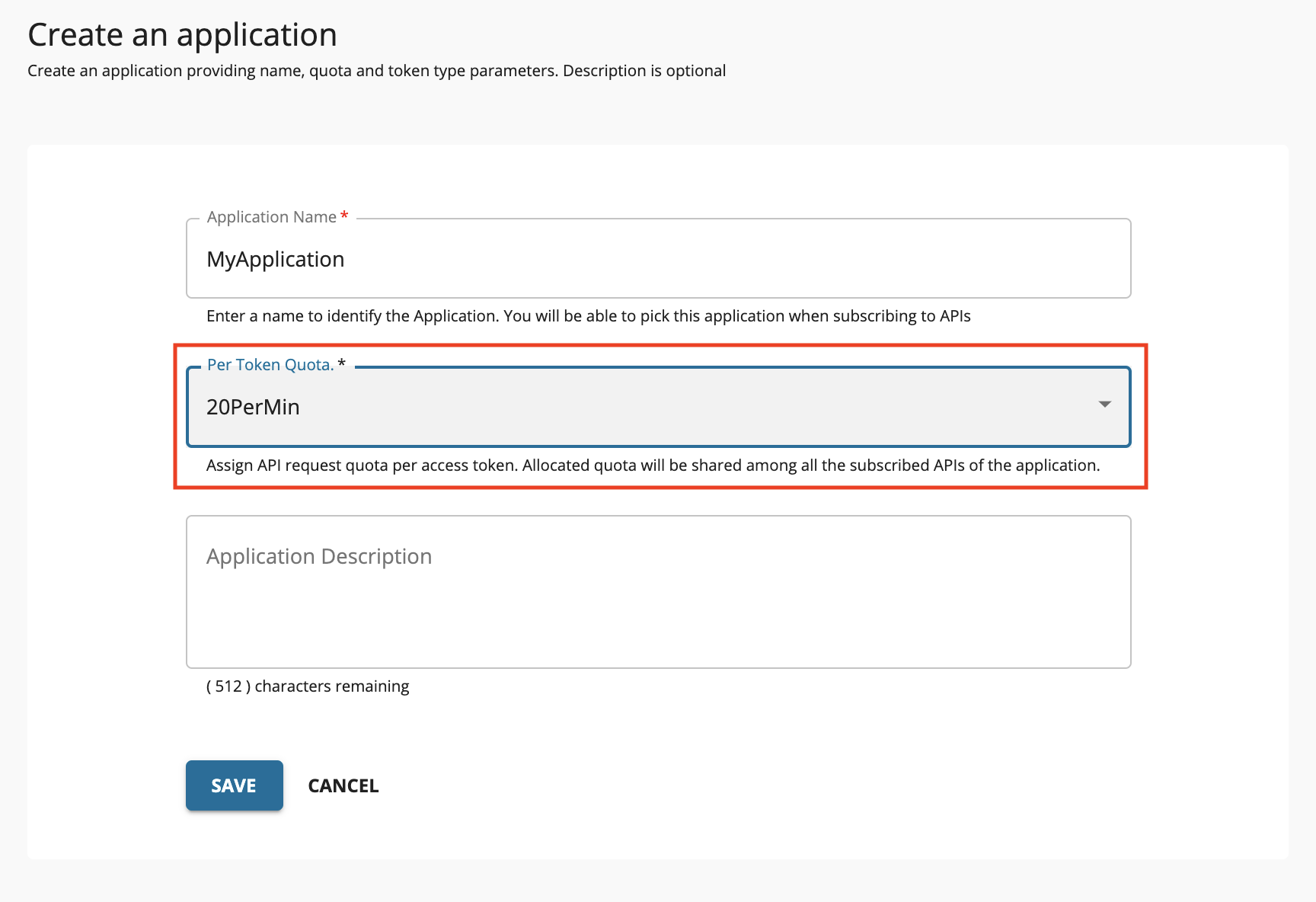 The default throttling levels are as follows: