The financial transaction involves communication between two systems through a socket connection. After the connection is established, each system can send messages in ISO8583 format, which commonly will be requested and the other system will send a response.

For example, the purchase made in a store may travel from the merchant terminal through another terminal such as banking systems. This requires a network or networks to the issuing bank where the card holder's account is held. Cardholder-originated transactions include purchase, withdrawal, deposit, refund, reversal, balance inquiry, payments, and inter-account transfers. ISO8583 also defines system-to-system messages for secure key exchanges, reconciliation of totals, and other administrative purposes. The response on authorizing or declining the transaction needs to be returned by the same route to the terminal.

To see the ISO8583 Connector, navigate to the connector store and search for "ISO8583". 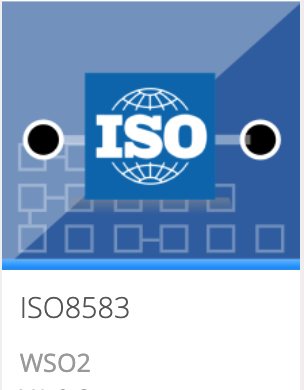 For older versions, see the details in the connector store.

The ISO8583 Connector allows you to send ISO8583 standard messages from an integration sequence. ISO8583 is an international messaging standard for financial transaction card originated messages, and is commonly used in transactions between devices such as point-of-sale(POS) terminals and automated teller machines(ATMs). Although there are various versions of the ISO8583 standard, this connector is developed based on the 1987 version.

As an open source project, WSO2 extensions welcome contributions from the community.

To contribute to the code for this connector, create a pull request in one of the following repositories.

Check the issue tracker for open issues that interest you. We look forward to receiving your contributions.