WSO2 uses Apache JMeter as the test client. WSO2 tests each scenario for a fixed duration of time. Thereafter, WSO2 splits the test results into warmup and measurement parts and uses the measurement part to compute the performance metrics.

Test scenarios use a Netty based back-end service which echoes back any request posted to it after a specified period of time.

In addition to the above metrics, WSO2 measures the load average and several memory-related metrics.

The following are the measurements collected from each performance test conducted for a given combination of test parameters.

There are key observations for the average user scenario of accessing APIs with 1KiB messages and the back-end service having 30ms delay.

The following are the key observations from the all performance tests done with different message sizes and different backend delays. (See Comparison of results for all charts used to derive the pointed mentioned below)

A throughput increase is observed in the transformation scenario in API-M 3.2.0, in comparison to API-M 3.1.0

The throughput increases up to a certain limit when the number of concurrent users increases. The Mediation API throughput increase rate is much lower than the Echo API. Throughput decreases when the message sizes increase. Throughput decreases when the backend sleep time increase. This observation is similar to both APIs. This means that if the backend takes more time, the request processing rate at the API Manager Gateway will be less. 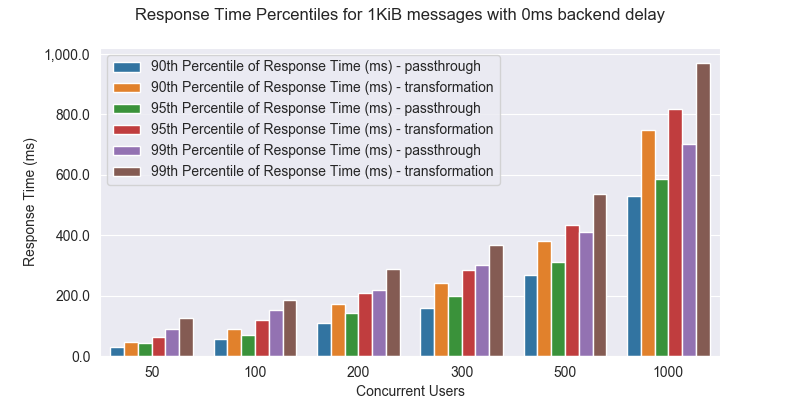